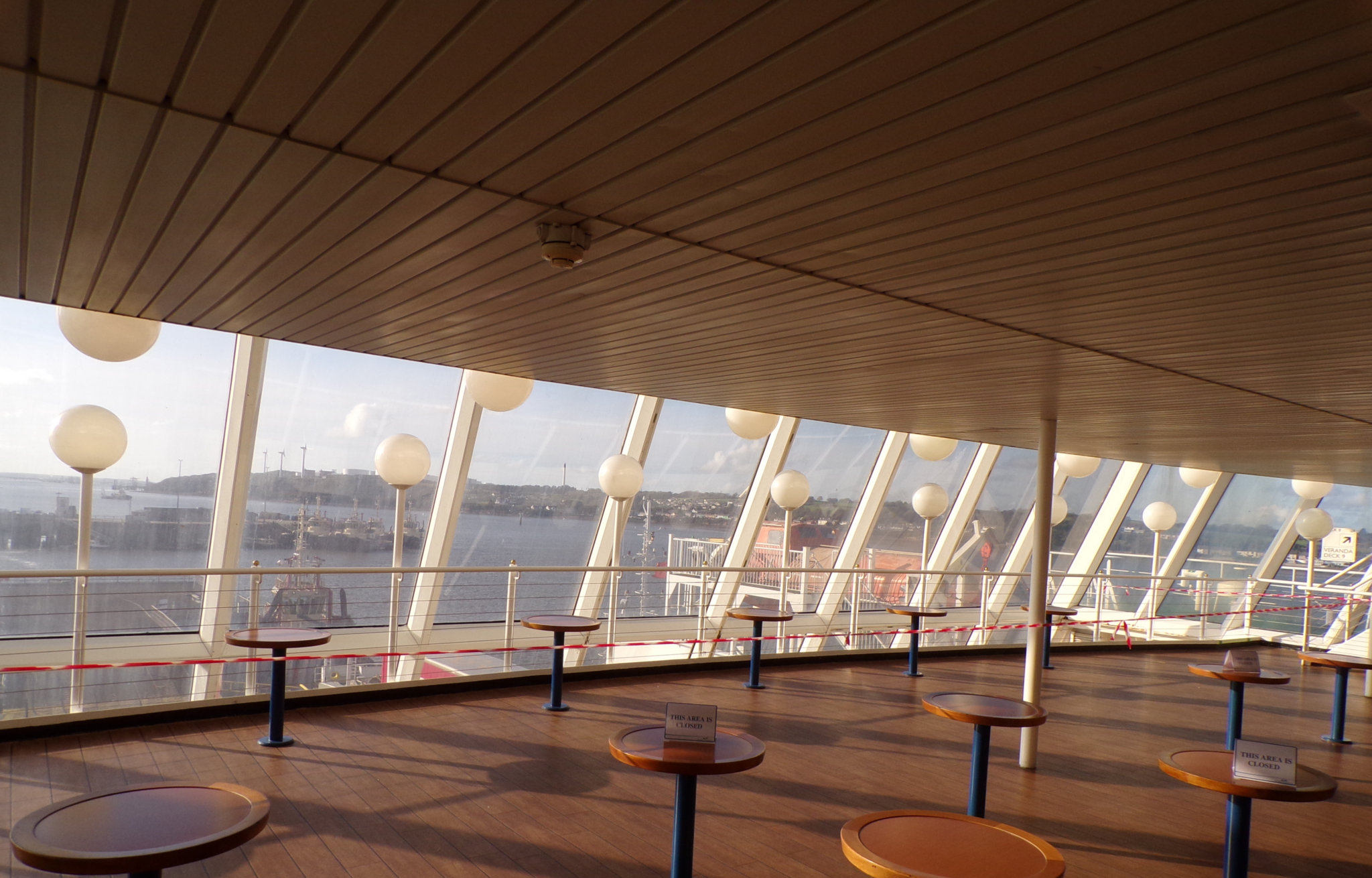 I normally fly when I travel between England and Ireland, but when I need my car, I take the ferry via Wales. Recently, I tried Irish Ferries Club Class on my crossing – here’s what I thought of Club Class on the Isle of Inishmore (between Rosslare and Pembroke).

On a day crossing, we would generally spend the four-hour boat journey walking around the ferry, popping into the shop, grabbing a bite to eat in the café or chilling with a coffee and a book.

The journey, during the day, takes us approximately 10 – 11 hours in total. For this reason, we don’t really need much more than somewhere to sit down comfortably and toilets/ food facilities on our journey.

The night crossing, however, can often be a very different experience, regardless of the need-for-sleep element being thrown into the equation. Anyone who has travelled this route at night or during the day, knows that the sea in and out of port can be, in a word, awful.

Owing to the fact that on this particular crossing we were leaving home at 5pm, driving for an hour, sitting on the boat for 4 hours, and then driving again throughout the night until 4am, we knew we’d need something more than just the cushioned benches in the public areas in order to get some rest to complete our journey.

When looking through the Irish Ferries website, we discovered we would have two options to choose from. We could book a cabin, or we could add Club Class to our tickets.

Unfortunately, despite myself and my partner both knowing we would require some rest whilst travelling, we’re also aware we aren’t the best at sleeping away from our bed at home, especially when, as was the case here, the bed would be on a vessel that doesn’t only move forward but also rocks from side to side in the overnight seas.

We decided that we didn’t want to pay for a cabin that we would just end up sitting awake in, so we looked at the Club Class Option.

What is Club Class on Irish Ferries?

Club Class is an additional option you can add-on to your ticket when travelling with Irish Ferries. For an extra fee, you are given access to a private lounge, away from other passengers, with extra benefits as I’ve detailed below.

Here is what is advertised as being included in the Irish Ferries Club Class Experience on their website:

Priority Vehicle Boarding – When we arrived at check-in we were given a token to hang on our rear-view mirror. This indicated that we were entitled to priority boarding. For me, this isn’t a big deal on a ferry, it’s more a flight thing. But it is nice to board first as it means your car is also one of the first off.

An Exclusive Lounge Bar – The Lounge Bar on the Isle of Inishmore wasn’t the most modern. It wasn’t bad, but the other lounge interiors advertised on their websites on other boats seems to look a lot plusher.

When you arrive at the Lounge Bar, they check your ticket and then tell you the code for the door. This means you can come and go as you please without having to wait for the member of staff to readmit you.

We were lucky that there were only one other group of people in the lounge for this journey, so we pretty much had one whole side of the lounge to ourselves which was nice and private – the area is in a sort of V shape, with the bar dead in front of you as you enter, and then seating areas round to the right and the left.

This also meant that we had complete access to the barman as and when we needed him for anything that wasn’t complimentary.

There were many more TV’s than elsewhere on the boat, which meant we could relax comfortably in our seats without inching to see, it also made for a much more personal experience.

Complimentary Drinks and Snacks – Unfortunately, again the pictures gave me a false sense of hope with regard to the comped food. Despite travelling at night, I didn’t expect to board to the same food that in my opinion been there from first thing in the morning.

There were crackers, little blini salmon things that I didn’t trust, a few slices of very hard, curled-at-the-side cheese with some grapes, meats of the same calibre and some other random bits and pieces including a few bits of fruit, some muffins and small cakes.

I did see some staff looking at the fridges with furrowed brows, but no one told us anything. If they were broken and that’s the reason the food was in such a poor state, I feel someone could have spoken to us to explain. There really were just two groups of people in the lounge all night – it wouldn’t have taken long.

Tea, coffee, juice, water and some house red and white wines were also complimentary. Other beverages could be purchased for extra at the bar.

There were also complimentary newspapers and magazines to read.

Up to 25% off of selected lines – This discount is on certain products, up to an amount of 25%, in the on-board shop. They do have some lovely bits and pieces in the shop and I would recommend taking a look, especially if you’re trying to find a gift for someone.

Power points – It is a definite plus to have power points free to use around you. I’ve often found the power points across the rest of the boat either don’t work or are quickly occupied by seasoned travellers who know the boat like the back of their hand.

We were able to charge our tablets, laptops and phones easily, though. The lounge also has free wifi which is helpful because I never get any signal during the main part of the crossing. It wasn’t great, but it was something.

How Much Does Irish Ferries Club Class Cost?

We paid an additional 18 euro per person, for two adults, to add the Club Class option to our tickets for a one-way journey.

Their website states that all entrants to Club Class, including children and infants, must pay the fee. Incredibly unfortunately, Club Class on the Isle of Inishmore is not wheelchair accessible.

I saw on another review that someone paid for the Irish Ferries Club Class option whilst onboard the boat. It seems they paid the same price as we did when we added it at the time of booking, so I guess there isn’t an ‘early bird’ deal to be had if you opt to wait or are unsure whether to add it on – FYI.

Is Irish Ferries Club Class Worth It?

For us – two people who require coffee to function, often don’t sleep well away from home, like to wander around at our leisure, enjoy privacy and like to travel as easily as possible – this was the perfect option.

But there is another reason this was SUCH a great purchase, as fate would have it.

On this journey, once we’d boarded the ferry and settled in comfortably, an announcement came out telling us that we were delayed by 4 hours.

That might not seem like a long time, but the journey on the boat itself was supposed to be 4 hours. We had additional 3.5 hours drive to get to our destination after we arrived AND our original arrival time in Pembroke was supposed to 00:45, so we were now not arriving until 04:45 – meaning we would end up doing a portion of our journey in the most ridiculous part of UK rush hour on the M25, tired and most probably feeling very, very shit after travelling for 14 plus hours overnight. Great.

So, for this reason, copious amounts of coffee were consumed. Hours were spent tossing and turning on the sofas under complimentary blankets and wandering around aimlessly, staring out the windows waiting for the engines to start, savaging the wifi in order to quell my boredom on the crossing.

The amount we drank in coffee alone (had we purchased them from the downstairs, non-comp café) would have cost us more than the addition of Club Class to our tickets. We had the benefit of having the comfort of the lounge for 8 long hours, and enough entertainment to get us through the mundane journey sanely.

So, I’d say Irish Ferries Club Class is worth it, and I’d definitely book again – but I do hope they update the interior on this particular boat soon – it just isn’t ageing well. I’d also like to be able to enjoy the complimentary snacks next time, too – I’m sure they were tasty when they were first bought out.

Have you ever travelled Club Class on Irish Ferries before? Let me know what you thought of the experience in the comments below!