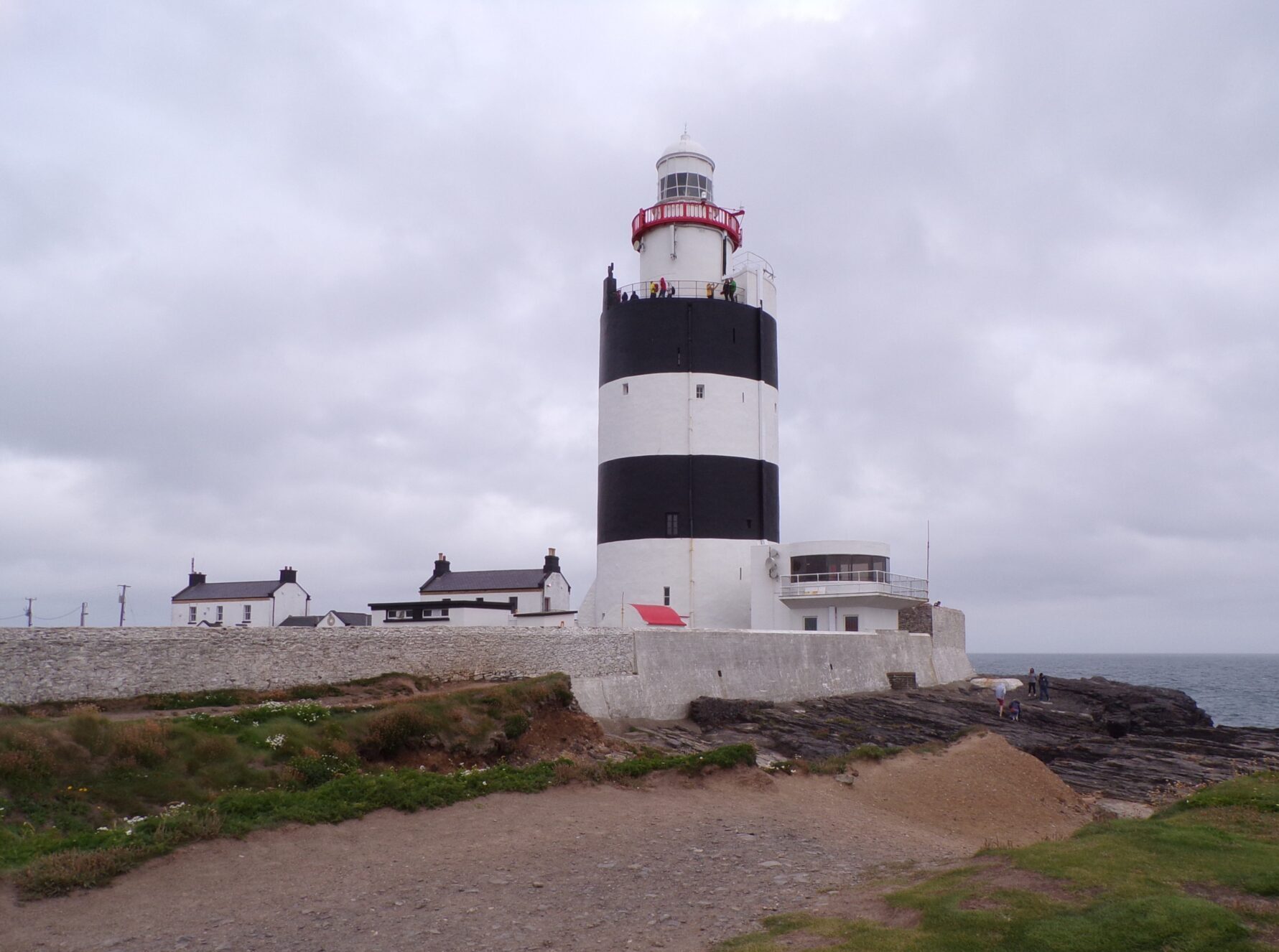 Looking for somewhere to spend a warm but rather blustery Sunday afternoon, Jon and I headed to Hook Lighthouse in Wexford on the recommendation of my Dad.

We jumped in the car and made the hour or so journey, and I am so glad we did.

Hook Lighthouse Wexford Ireland: The Oldest in the World

Now – I don’t claim to know much, if anything about lighthouses, but this one in particular is absolutely glorious and the history so interesting that after research it seemed like a great place for us to go and explore.

Between 500 and 1000 AD, a monastery was founded by St.Dubhan in Churchtown, just up from the site of the lighthouse today. The name was changed to Rinn Dubhain (Gaelic for Dubhan’s Headland), and monks are said to have taken it in turns to flash a warning beacon from the peninsula to warn sailors away from the rocky headland.

Between 1169-70 the Anglo-Normans landed, making their mark across the South-East with Strongbow, leader of the invasion, becoming Lord of Leinster.

William Marshal, ‘the greatest knight who ever lived’ married Strongbow’s daughter Isabella suceeding his father-in-law as Earl and Lord. Marshal founded the town of Ross as the port in Leinster, developing the region. This contributed to the intense port rivalries I mentioned briefly in my post about the Waterford Medieval Museum. He built Hook Lighthouse as a guide for ships to safely dock in his port.

Today, Hook Lighthouse stands proud against its watery backdrop. Visitors can enjoy guided tours every half an hour which take about thirty minutes to complete.

Due to the nature of the building and it still being operational, you have to enter with a guide, but prices are reasonable: Adults 10 Euro, children 6 Euro – concessions available and children under 5 go free.

It is worth mentioning that if you are on a budget or don’t fancy actually going inside the lighthouse, you can still use the facilities on site and enjoy the attraction from the outside. There are also a few free exhibits – it’s a great place to take a family picnic!

Hook Lighthouse has 115 steps to climb, but it’s worthwhile as when you reach the viewing platform you are met with uninhibited views of the beautiful Irish landscape.

When we visited a pirate was engaging all the children in activities – running a sack race and giving out stickers etc. – this was certainly an added touch for parents who wanted to kick back with a coffee after climbing all those steps.

There was a great atmosphere in spite of the fact that the weather wasn’t 100% that day.

We had a lovely time exploring the lighthouse and its beautiful location. We’d certainly return for a picnic on a warm day owing to the stunning views from the peninsula and its gorgeous location.

Have you ever visited Hook Lighthouse or have you been to a different lighthouse before? Is there a historical lighthouse near you? Let me know in the comments below?