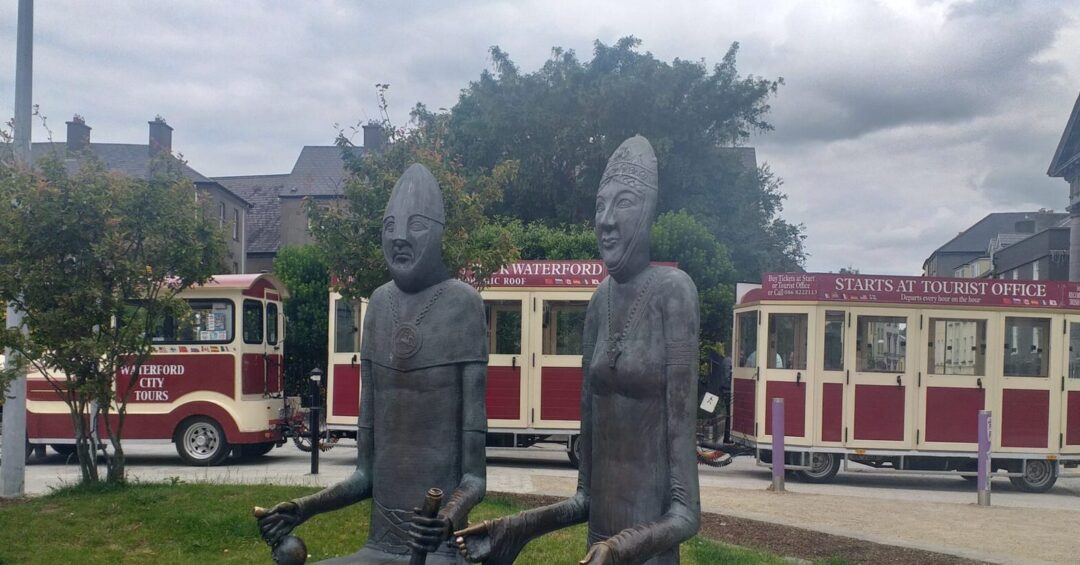 Waterford, one of Ireland’s oldest cities, is steeped in history and evidence can be found at every turn. Founded in 914 by Viking settlers, their impact remains prevelant today, especially when visiting Waterford Viking Triangle. Through the pictures I’ve taken, I’ll take you on a short walk around the area.

This area of the city is called the Viking Triangle because of the 1000 year old Viking walls that once surrounded it. It is home to museums and narrow streets lined with cafes, restaurants and coffee shops, and there is something to see around every corner.

Many parts of the original walls remain dotted around the city – if you visit the Penneys (U.K. Primark) in the town center, part of the wall actually runs through the middle of the shop. In order to preserve it, the store have placed it behind thick glass – but it’s there and is a sight to see!

Starting out on the Quay, we were met with a tall, round structure called Reginald’s Tower. The location of the meeting place of Aoife and Strongbow, it is now a museum, but its previous uses included a prison, a mint and a military store as well as a defence tower due to it’s location on the side of the River Suir.

Built in 2012, outside of Reginald’s Tower sits a replica Viking longboat, apparently created with timber felled way back in 1042-1043 AD. It’s fascinating to look at and a great spot to get some photographs.

Just slightly up from the Quay, you will come across two bronze sculptures of Strongbow and Aoife, unveiled in 2014.

There are three main museums within Waterford’s Viking Triangle: Reginald’s Tower, Bishop’s Palace and the Waterford Medieval Museum , which I visited recently. All three are worthy of a visit and worth the entry fee.

In recent years the museums have also introduced the world’s first ever virtual reality Viking experience. I haven’t personally tried it yet but I plan to in the near future. It looks like really good fun and a very different experience.

Around the corner from the Museum, down a narrow street, is the world’s longest Viking wooden sword which was unveiled in 2014. Intricately carved and 23 meters in length, the painstaking detail in itself is amazing let alone the length of it!

The sword is located next to a delapidated French church known as Greyfriars Abbey. This Friary was one of the first to be built in Ireland, and dates back to 1241. For more on Irish history, you can see our visit to the National Heritage Park in Wexford.

Other Fun Things to See in the Waterford Viking Triangle

There is a giant chessboard just outside of the Medieval Museum. You can also become a Viking for a photograph outside of Reginald’s Tower which is fun – here’s my mum modelling ‘how to’ just for you guys:

Around every corner there seems to be something new to discover. It’s lovely to spend a few hours just mooching around taking it all in, stopping for a coffee or in a few shops along the way.

Even though this isn’t actually part of the heritage, obviously, I found this cute little flat window, decorated with knicks and knacks to be photo worthy – it all adds to this gorgeous part of Waterford City which I highly recommend you take a walk around when visiting.